The Market is Moving!

Another week, and another retailer announces a new policy to address toxic chemicals in consumer products! This time it’s Target.

The Minneapolis-based retailer announced it is adopting the “Target Sustainable Product Standard”. The standard will be used to rank products according to several factors — including the toxic chemicals they contain. More sustainable products will be “rewarded with program incentives.”

There are several uncertainties about the program that must be clarified, including what the “program incentives” are, whether the policy will actually eliminate harmful chemicals from store shelves, and whether consumers will have enough information to make healthy purchasing decisions.

That said, we are excited about what this step signals. The announcement singles out “chemicals with high level health concern” which look familiar to us — because they include chemicals on lists developed by both California and Washington state, thanks to their strong state-level policy. These are chemicals identified by the state as a concern for health and, according to Target’s new policy, ones the retailer might not want in their stores.

But states aren’t just listing chemicals; they’re requiring companies to take action too. If a company’s product contains a chemical on one of these lists, state law requires companies to label or report that their products contain the chemical.

“It’s probably no accident that Target chose these carefully researched chemical lists rather than its own industry-decided version. No company likes having to report to consumers that one of their products contains a toxic chemical. Complying with regulation is good for business. Without legal requirements to report or label products, companies might not be taking the issue so seriously,” Doll says.

Here at Safer States we’re thrilled to see state laws having an impact on the marketplace. Announcements like this underscore that they provide strong incentives for companies to do the right thing. In the legislative halls, on the ground, and in the store aisles — together, we’re all moving forward.

“Target’s policy is a great example of how state laws help transform the marketplace and guide companies to safer products. States are saying ‘these are the chemicals we’re concerned about’ and companies are starting to listen.” Sarah Doll, National Director with Safer States. 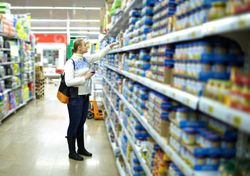