(Portland, OR) –States are stepping up to protect public health from harmful chemicals, according to an analysis by Safer States. The analysis found that at least 29 states will consider more than 180 policies to require companies to disclose what is in their products as well as limit exposures to toxic chemicals. These policies include bans on PFAS in food packaging and firefighting foam as well as bans on toxic flame retardants in electronics. The analysis, including a searchable database, is available online at SaferStates.org/bill-tracker.

As the Trump EPA continues its assault on the environment and public health, states continue to take action to protect the public from harmful chemicals. Last year, states including Washington, New Hampshire, Colorado and Maine passed policies to restrict the use of cancer-causing chemicals like PFAS, phthalates and flame retardants. This year, 26 states have introduced policies to limit the use of PFAS, while 11 states are proposing limiting flame retardants.

"States are at the forefront of creating community health protections from toxic threats like forever PFAS chemicals and this year is no different” said Sarah Doll, National Director of Safer States. “The news about widespread PFAS contamination, chemicals in plastics and flame retardants in electronics have spurred legislators to take broader action for the sake of public and environmental health."

States are moving turning off the tap on PFAS pollution by looking to restrict major uses such as in food packaging, carpets and firefighting foam. States are also aiming to set strong drinking water provisions and testing.  At the end of 2019, the federal government included several provisions in the National Defense Authorization Act to eliminate PFAS from military firefighting foam, aid in cleaning up PFAS and providing more information on where PFAS is being released into the environment. While these policies are welcome news to the millions of Americans drinking contaminated water, they are small steps and states must still act to stop ongoing contamination.

States are also pushing for more authority to hold polluters accountable and for drinking water standards and testing. According to a Safer States analysis, taxpayers are spending millions of dollars to clean up PFAS contamination. Some states, like Michigan have filed lawsuits against PFAS manufacturers while others including Vermont are pushing for legislation to hold polluters responsible for medical monitoring of those exposed to harmful chemicals.

"Nearly two million Michiganders are drinking PFAS-contaminated water, including over 100,000 of my constituents," said Senator Jeff Irwin (MI-18). "Michigan is on the cusp of setting health-protective PFAS in drinking water standards, but we have to turn off the tap on these chemicals and shift the burden to pay for clean to polluters."

Safer States have also identified at least 8 states introducing policies requiring more disclosure of the chemicals used in every day products. California’s bill to require disclosure of ingredients in fragrances used in cosmetics builds on existing laws in that state and in New York requiring disclosure of ingredients in cleaning products. Disclosure laws are often as powerful as chemical restrictions, forcing supply chain transparency and allowing consumers to know what they are putting on their bodies and bringing into their homes. Transparency is often followed by reformulation to safer substitutes demonstrating the power of these laws.

"We can’t wait for Washington to do something about our health. New York is leading the way by addressing how we produce our energy, requiring disclosure of information about chemicals in products, and taking action to restrict materials that we recognize harm our health and the environment," said New York State Senator Todd Kaminsky. "Time is of the essence to address the major, planet-changing challenges us before us. As always, states are leading the way to advance innovative solutions."

State policies not only provide protections for those living in their state but also send strong market signals—and over the last 5 years, it is clear the market is responding. In the last year alone, major grocery and restaurant chains including Whole Foods Market, Trader Joe’s, Ahold Delhaize, Albertsons, Panera Bread, and Taco Bell have taken action on PFAS in food packaging in their stores. Other retailers including buy buy BABY, Staples and Target are working to eliminate chemicals like phthalates and flame retardants from their products while The Home Depot and Lowes recently committed to removing PFAS from all carpeting and rugs sold in their stores.

“States are sending powerful signals to the marketplace and many retailers are responding, taking action to eliminate toxic chemicals from their shelves,” said Mike Schade, Mind the Store campaign director. “As a growing number of states are expected to introduce legislation to safeguard families from harmful chemicals, it only makes sense for major retailers to get out in front of these regulatory risks and take action now.”

According to Safer States' analysis, here are some of the policies states will consider in 2020:

Since 2003, more than 35 states have adopted 196 policies that establish state chemicals programs, identify, limit or ban the use of harmful chemicals in products including baby bottles, furniture, electronics, toys, cosmetics and cleaning products.

The complete analysis is available online at saferstates.org/bill-tracker.

"States are at the forefront of creating community health protections from toxic threats like forever PFAS chemicals and this year is no different” said Sarah Doll, National Director of Safer States. “The news about widespread PFAS contamination, chemicals in plastics and flame retardants in electronics have spurred legislators to take broader action for the sake of public and environmental health." 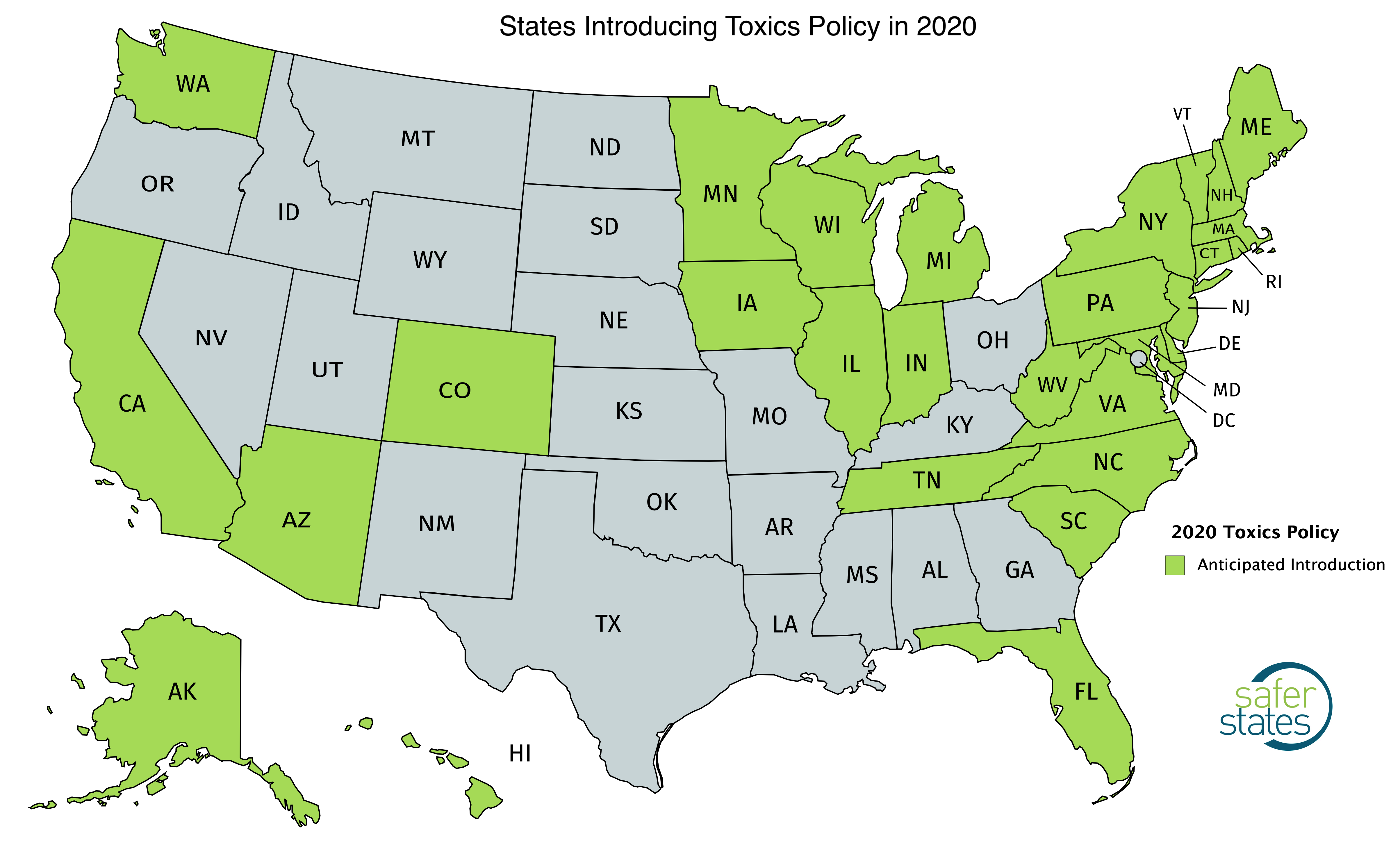